Much has been written about the distinctive qualities of fine wines and I for one, have often found the views of refined connoisseurs beneficial in experimenting with new wines I may have otherwise overlooked.

However, in these budget-conscious times, few of us can afford to indulge in wines that command a hefty price tag on a regular basis, particularly those amongst us who may be euphemistically considered “red-wine enthusiasts,” or perhaps more accurately; borderline (or not so borderline) alcoholics.

Being a fully paid up member of the club means I’m typically relegated to wines in the $15-$20 price bracket however even here, a convivial weekend of drinking can easily blow the budget. Venturing below the $12 threshold is not for the fainthearted so for the benefit of those who may find themselves in this unfortunate predicament here is a list of the Worst Wines in the World in no particular order.

These are the wines that even when desperation calls – like those times when you’re scrambling around the kitchen at two in the morning searching for a bottle of red – should be avoided at all costs.

Worst Wine in the World No. 10

This wine, like their others, comes from Casella Wines in South Eastern Australia, and according to the label, the Casella family has been inflicting their wines on the public for three generations.

However, these aren’t really “wines” in the traditional sense (think strawberry jam combined with paint thinner). The nicest thing I can say about this wine is the colour. It has a nice deep plum colour as it fills the glass.

The aroma however, is arresting upon first sniff. I picked up scents of stale locker room, unwashed laundry and a sort of damp mould.

Upon tasting Yellow Tail Shiraz, there is an immediate and harsh bitterness to the flavour.  It lacks any red or black fruits and evolves into a kind of burnt toast taste just prior to the alcohol-laden tannins mercifully blunting the palate.

While that may sound interesting, there is distinctive “chemical quality” to the aroma I didn’t like.  It’s very pronounced and overwhelming as you try to taste the wine. Not too dissimilar to liquid amonia which, like this wine, could kill you if ingested inadvertently.

It might go well at a casual barbeque with friends, should you find yourself in need of something to extinguish errant flames.

Worst Wine in the World No. 9

I purchased this abomination at a suburban Vietnamese restaurant last month.  The whole bottle cost $16 at the restaurant!  This should have been a massive red flag as no decent bottle of red wine served at any restaurant worth its salt should cost less than $30.

The aroma is fairly powerful.  After pouring, I noticed it from a good six feet or so away from the glass. Up close you get more of an insipid raspberry aroma and a rather unpleasant overpowering sting of alcohol in the nose.  A fresh swirl of the wine in the glass seemed to release more “sting” making it both odious and undrinkable.

I took a sip and thought my tongue was going to fall off.  I tried washing down half a glass with a Corona chaser, but even that wouldn’t kill the taste.

The wine finishes long with a continuing bitterness and an aftertaste that’s difficult to describe let alone erase.  It’s an experience I don’t care to repeat. Needless to say, I didn’t like it.

Worst Wine in the World No. 8

The Penfolds brand is synonymous with quality. Except when it’s not, which is where Penfolds Rawson’s Retreat comes in.  The label looks innocent enough, with the distinctive Penfolds brand that adorns more palatable alternatives. However, looks can be deceiving. One can only assume Penfolds created this monstrosity as some kind of sick joke. By the appearance of the bottle, you’d even presume it was drinkable.  But it’s not. It’s fucking awful.

Worst Wine in the World No. 7

Merlot is the beige of the wine world, the sensible shoes or the unimaginative little black dress that goes with any occasion.

For this reason it’s often a safe bet for people who don’t actually like or drink wine. It’s deliberately intended to be innocuous and unassuming, but as such, suffers the fate as Pinot Grigio in that it’s both bland and tasteless.

Why it even exists is beyond me. Merlot should be banned. Or at the very least, shouldn’t be called “wine.”

It’s a watered-down, embarrassing, flavourless waste of time and consumption. It’s a missed opportunity to enjoy something far better.  Like going to a steakhouse and ordering a salad.

Worst Wine in the World No. 6

Australians love a celebration and what better way to celebrate that special occasion with a few friends than to pop the cork on perfectly chilled bottle of Krug, Bollinger or Veuve Clicquot.

However things being as they are, the price tag of your typical classic French Champagne is often out of reach for the average Australian consumer. Recognising the opportunity to meet a particular segment of society at a price point they can afford, the people behind the ‘Whispers’ range of sparkling wines have come up with this muck they call “Strawberry Spumante”.

If the manufacturers of crystal methamphetamine ever decided to enter the liquor market with a product targeting teenage girls who either a) had a death wish, or b) just wanted to experience temporary oblivion with a sugary-sweet drink that tastes both medicinal and deadly at the same time, I imagine they’d come up with something like “Whispers Strawberry Spumante.”

Hints of strawberry cordial give way to notes of battery acid and nail varnish remover on the finish.

This stuff is so fucking bad, the last time I drank it (okay, lots of it) I woke up under a shrub in the front yard and spent the next 24 hours spewing up pink bile in the shower.

Worst Wine in the World No. 5

No review of the Worst Wines in the World would be complete without an honourable mention of Vang Dalat – the household table wine of Vietnam available in both “white” and “red” varietals.

Both the red and white wines are best served chilled, although the actual manufacturing process and the ingredients remain a mystery. According to the label, the red wine consists of “grape wine cut with fermented mulberry juice,” so essentially a fairly strong concoction of rotten fruit, which is exactly how it tastes, but worse.

The aroma can best be described as ‘volatile.’ I recoiled and nearly fell of my chair when I first took a sniff, but if you serve it extra cold, it can quell some of the odour to some extent.

When you taste it, it’s bitter — and also kind of tart. I wouldn’t go as far as to say acrid, but it’s something that’s difficult to describe let alone comprehend.

Looking at the colour, there are signs of degradation, which can happen when wine is stored at the wrong temperature. Given that it’s from Vietnam, it’s fair to say it’s probably been exposed to temperatures and humidity that would destroy even the most robust of reds.

Also being from Vietnam, this doesn’t stop anyone from selling it. It’s not horrible, it’s just peculiar. Like eating an oyster of questionable origin and then wondering whether you’ll live to tell the tale later.

Vang Dalat is best opened and consumed immediately, as the longer you leave it sitting there the worse it gets. Which isn’t really sensible let alone advisable, as you’ll probably just end up vomiting profusely. As I did, after gagging back a bottle on a train trip from Saigon to Hanoi.

Worst Wine in the World No. 4

Anything from the Gossips range, Australia ($3.99)

I’m not sure who’s behind the Gossips range of budget-priced wines but whoever they are they should be rounded up and shot and their vineyards burned to the ground.  This stuff is revolting!

Merlot, Chardonnay, Shiraz — it doesn’t matter.  They all taste uniformly horrible.  Some time ago, I made the gross miscalculation of purchasing something called the “Gossips’ Special Reserve,” which was priced at an outlandish $7.99 — double the cost of the standard Gossips red wine!

It was undrinkable.  That experience made me wonder — if the premium wine costs twice as much and yet tastes so awful, how bad must the cheaper stuff be?

Serve it to someone you hate.

Worst Wine in the World No. 3

It sounds like a chemistry experiment that’s gone horribly wrong, and oddly enough that’s exactly how it tastes, but nevertheless they decided to bottle it and sell it anyway.

Loosely classed as “wine” but more closely resembles some sort of cheap apple cider that’s been left out in the sun. When people talk about wine smelling like paint thinner, they’re probably talking about this one.

It tastes like Glen 20 disinfectant spray smells;  as if someone tried to fix a bad wine by Febreze-ing it.

A kind of cavity-inducing sweetness with no redeeming flavour, save for the metallic undertaste of mediocrity. Like sour peach gummies mixed with kitchen waste.

Basically, a migraine waiting to happen. Unsurprisingly I find it hard to recommend.

Worst Wine in the World No. 2

Once considered one of Germany’s most successful exports, Blue Nun gained a huge following in the 1970’s and 1980’s when the aspirational working classes in the UK and far off antipodes figured it would perhaps be considered ‘more sophisticated’ if they consumed wine from something other than a goon bag.

While this idea was a good one, particularly when drinking with friends, why they settled on this sickly white wine from Germany is anyone’s guess. Maybe it was the wistful image of the Blue Nun on the label, gazing off into the distance seemingly longing for a forgotten time when Germany once produced better wines.

Most German wine is undrinkable. But this white wine is so bad it could almost be from Italy.  But even in Italy they know how to package their wine in raffia encased bottles so that when you invariably tip it down the sink after one or two glasses, you still have an attractive candle holder afterwards.

That’s clever marketing. Even if they are still selling poison.

Worst Wine in the World No. 1 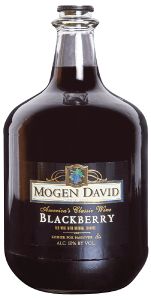 Any wine that comes in a three litre flagon with a pop cap is an abomination and perhaps the worst culprit of all is this liquid atrocity called “Mogen David Blackberry.”

If you’ve ever thought about killing yourself but lacked the means, a bottle of Mogen David would probably be a good place to start.

I drank this wine alone, which admittedly was a mistake, but at least I didn’t put anyone else’s life at risk. I was contemplating suicide after just two glasses.

To be honest, I don’t know who the fuck “Mogen David” is, or even know if such a person exists, but one thing’s for sure –  he is to wine what Sammy J is to comedy. [Not funny].

Disclaimer: Our legal department suggested we add a disclaimer to say that some of the wines above may have been corked or suffered some other adversity that may have affected their taste beyond the winemaker’s control after it left their warehouse or distribution centre, so here it is.